We were absolutely delighted to host Prof Madhur Anand and Prof Chris Bauch visit our lab and give departmental seminars.

It was a really short visit, but we all really enjoyed how they used elegant mathematical and data-driven approaches to understand socio-ecological systems. 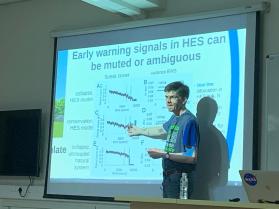 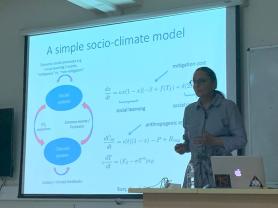 I am super delighted to share this — somewhat belated — news that Sumithra Sankaran has defended her PhD thesis on 7th December 2018. Sumithra’s thesis was on understanding how local interactions, spatial patterns and ecosystem stability are related. Needless to say, Sumithra gave a fabulous presentation and the examiners (including external examiner Prof Partha Sarathi Dutta from IIT Ropar, Department of Mathematics) were super impressed.

It is worth noting – especially for prospective students to our lab – that Sumithra was formally trained in zoology and wildlife biology. Because of her exceptional interest in theory, she did a thesis in theoretical ecology involving fairly involved mathematical calculations, e.g., mean-field models, stochastic differential equations and their analyses via Fokker-Planck equations, cellular automata models. Finally, testing her predictions of theory with empirical data – which required another suite of skills in analysing remotely-sensed data, statistics, and making sense of results in light of theory!

Do check some of her papers here, here, here and here. There are two more being prepared.

Congratulations to Sumithra – its been so much fun collaboratingworking with you – which I hope we will continue!

Although I have tweeted quite a bit about this paper, I have been rather slow to announce this paper on this blog.

In this paper, we conduct an empirical test of early warning signals in a dryland ecosystem in China. This was based on a very cool email-collaboration with Chen Ning, a graduate student at that time.

The empirical analyses closely match with results of one of my PhD thesis paper with Prof C Jayaprakash, who is also a coauthor on this paper.

Suma from Gubbi Labs wrote this really nice popular article for Research Matters and it was also picked up by Deccan Herald, a very prominent English newspaper in South India !!!!

She will be presenting her work titled “Inferring critical points from spatial ecological data”. This is a joint work with PhD student Sabiha Majumder and Sriram Ramaswamy, both from Physics Department, IISc.

Her presentation is scheduled for Friday, 11th August at 8:20am. If you are attending ESA, do go to her talk!

Congratulations to Dr Krishnapriya Tamma for the National-Post Doc Fellowship from SERB to work in our lab.

Krishnapriya will work on analysing various remotely sensed images of vegetation to understand and to predict tipping point phenomena natural forests across the world.

Priya Tamma is not really new to our lab. She was already on a postdoctoral position in our lab from April 2016. This fellowship gives her additional three years to continue her work. This will also allow her to pursue newer directions of research apart from primary focus areas of our lab. Apart from global scale analyses of vegetation, she is deeply interested in understanding biogeography, ecosystem patterns and conservation issues n North-Eastern India.

Before joining our lab, Priya Tamma did her PhD from our neighboring institution NCBS, in the lab of Prof Uma Ramakrishnan, on biogeography of Himalayan region. Check our her Google scholar profile to see her interesting publications.

We are delighted that our recent GEB paper on spatial indicators of critical slowing down has been featured with a front cover image (by Stephanie Eby)! This is also the first instance of front cover appearance for our lab’s paper, so we are delighted! 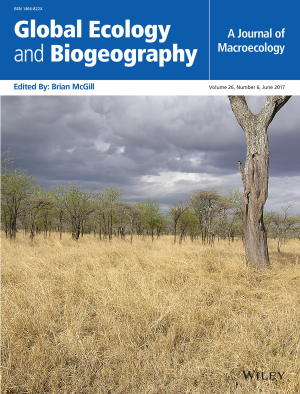 Our friends from France, Sonia Kefi and two of her group members Miguel Berdugo (currently a student of Prof Fernando Maestre in Spain and soon moving as a postdoc with Sonia) and Angeles Mayor (a postdoc with Sonia) visited Bengaluru for about a week. They enjoyed the tree festival Neralu and other small fun events in the town.

Of course, we all met them to have exciting discussions and how to take our collaboration forward. Here is a group picture at a cafetaria. 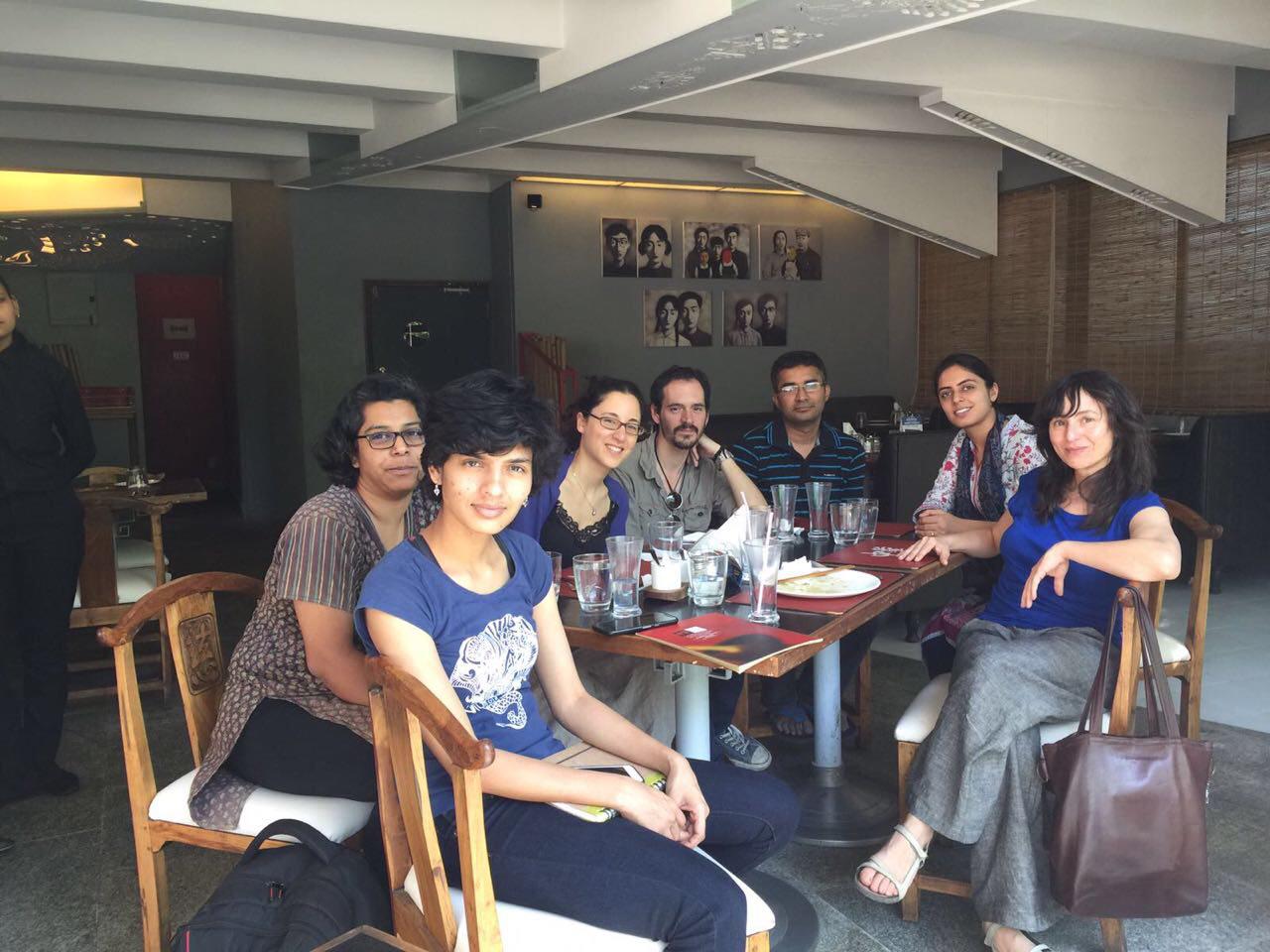 We are happy to announce that our new paper on testing theory of spatial indicators of critical slowing down and ecological transitions has appeared in the online early version of the journal Global Ecology and Biogeography. The paper was highlighted via a cover image (left) taken by Stephanie.

Congratulations to Amit Agrawal (former project assistant of our lab) and Sabiha Majumder (PhD student) for their first research publication! This project began during conversations between Stephanie Eby, Andrew P. Dobson and myself. That was back in 2010, when I was a post-doc at Princeton. They had this excellent high resolution data that made sense in the context of a theory paper from my thesis in 2009.

So what is this paper about?

Ecosystems like clear lakes or forests can abruptly collapse to ‘unhealthy’ states like toxic-turbid lakes or deserts with low vegetation. Our lab uses ideas from physics of phase transitions (e.g., water boiling to become vapour) to develop statistical tools of early warnings of such abrupt transitions. For example, two papers of my PhD thesis (Guttal and Jayaprakash 2008 and 2009) were on developing such tools to analyse time series and spatial data from ecosystems. The underlying theory is now popularly known as ‘Early warning signals of critical transitions’, “Theory of Critical slowing down”, etc.

In this paper, we were testing such tools using spatial data of large scale ecosystems. There were earlier efforts to test these quantitative tools, but mostly in simple laboratory conditions or controlled lake experiments.

Specifically, we test the prediction that the following metrics show stronger signatures of transitions ‘before a collapse of an ecosystem’

(A) Spatial variance (proposed in Guttal and Jayaprakash, 2009)

(B) Spatial skewness (proposed in Guttal and Jayaprakash, 2009)

This graph below shows how theoretical predictions and real data match. 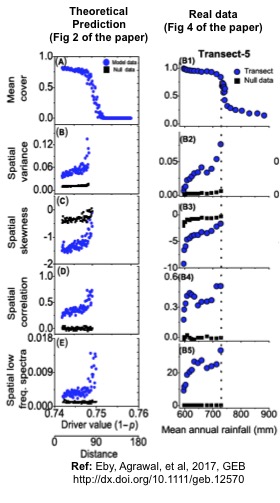 There were a few subtle and insightful aspects related to analysing this dataset. First, we didn’t have an ideal dataset, so we had to make an approximation called ‘space-for-time substitution’ to compare theory with real data. We justified this approach using a model. Second, the data were discrete-state (occupied/unoccupied), unlike what the models typically assumes continuous variables (like biomass density) in each of the above papers. We developed a data preprocessing method called coarse-graining, inspired from the physics literature. We thought the method to be sufficiently important and hence the details of the method will be published separately. Analysing this dataset has motivated various thesis chapters in our lab’s PhD student Sabiha Majumder, who is from Physics department and works jointly with me and Prof. Sriram Ramaswamy.

I should add that reviewers gave detailed comments that helped the manuscript a lot. This was also our first manuscript where we used services of Axios.

All codes and some data associated with this manuscript are available on our Github page: https://github.com/tee-lab/spacetime-csd

Our new paper showing “Lack of Critical Slowing Down Suggests that Financial Meltdowns Are Not Critical Transitions, yet Rising Variability Could Signal Systemic Risk” is out in PLoS ONE!

Nature India carried out a very nice article on our work, written by Mr Varma. National University of Ireland, Galway issued a press-release (an initial draft of which was written by Rajashree of Science Media Centre, IISc). and featured it on their website. Here is a media article at Deccan Herald, but whats written there just does not make sense.

This work was done in collaboration with Dr Srinivas Raghavendra, an economist at the National University of Ireland, Galway. We started the work sometime in mid-2012. Nikunj Goel, a Physics undergraduate student at IISc, joined this work in early 2014 and did enormous contributions to the manuscript. Quentin Hoarau, an undergraduate itern from CNS, France, was also a co-author on the manuscript.

Along with my collaborators Srikanth Iyer and Srinivas Raghavendra, I am organising an ICTS conference on “Modern finance and macroeconimics” from Dec 22nd and Jan 2nd.

We are delighted that our school got a coverage from Deccan Herald, an important newspaper in southern India. My colleague Srinivas Raghavendra and a student participating in the conference are quoted in the article.

In this school, I will be teaching techniques related to our collaborative work on testing predictions of early warning signals of critical transitions in financial markets. This work was done with Srinivas Raghavendra and my former UG students Nikunj Goel and Quentin Hoarau.

And Happy new year to all!